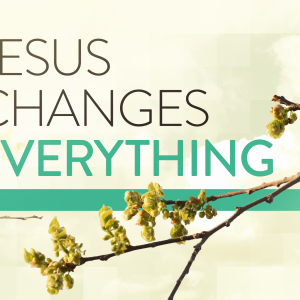 We experienced some technical difficulties this morning. This is an edited version of the service with text below filling in the gap content at the times specified:

For the gap at 29:14 (in the video)
Jesus was crucified because I was so bad that once I did turn my heart towards God and receive his forgiveness because of Jesus’ death…Jesus’ job was done…and God would now be able to tolerate me. No matter what I did God was a little skeptical of me because he knew I was going to disappoint…which I felt I did often.  When I was 19 that changed somewhat as I knew I didn’t fit into that group, I actually didn’t want to fit into that group…and I was skeptical if God was really like that. I was sure there was a God out there, so I checked out a really liberal church (a conservative Baptist church)  I experienced culture shock by going to a Baptist church. I wasn’t sure if they were Christian…this was affirmed by my first experience on a Sunday. The first Sunday I went, a lady got up and sang a beautiful worshipful song…however, she was wearing pants…her head wasn’t covered…and I was very uncomfortable.

For the gap at 29:45 (in the video)
I met a Pastor who was to have a significant growing impact on my life. And my view of God began to change… Fast forward 5 years and I find myself (still with flavors of who God was from my childhood) walking down the Hallways of Briercrest Bible College. And I was about to have what I would call a “Divine Encounter”. I still remember it clearly…no one was in the halls, might have been a Friday afternoon…I was walking past Mister Bob Seale’s (Department head of Theology) office I didn’t know him, had no relation with him, but I found myself sitting in his office…and we talked for I’m thinking 15 minutes. I knew we talked about God. And then when I got up and walked out… something had changed… You see I walked in thinking God didn’t like me…he mostly tolerated me.
And I walked out knowing God actually loved, liked and cared about me… My view of God had changed dramatically…I walked down that hall, the linoleum tiles were glowing, the fluorescent lights looked brighter… the sun shining way down the hallway was more inviting than it seemed I had ever seen before. My View of God had changed…and it would greatly affect my life… Does your view/understanding of God need to change? That divine encounter moved me out from under the critical, cool eye of a distant God to being on a journey with a warm loving God who cares greatly for people…it was like I had opened a door I didn’t know was their and as I moved through the door I found things I didn’t know existed…and threw that door many other doors have appeared opening new understandings of God. So, the answer to that question is, Yes it does…!

For the gap at 34:17 (in the video)
Jesus interacts with a man who had been trying to get into the water when stirred for 38 years without any success. Jesus simply commands him to “Get up, take your bed and walk” The man hops up, rolls up his mat, picks it up and heads off, no doubt excited as his legs are working for the first time in 38 years. There was a huge problem… The problem was it was Sabbath.
Let’s look briefly at Jesus’ interactions with the religious over this miracle. (John 5: 16-18)
There were 2 problems: 1) Jesus had “worked” on the sabbath…or more accurately he had told someone to work, and they did…the man had picked up his bed roll and carried it. This wasn’t a violation of the Sabbath it was a violation of the 39 plus rules the Pharisees had added to the Sabbath. Jesus in his interactions over this incident claimed to be equal to God… In the creation story, God had created for 6 days then had rested…that had become one of the main commandments in the Hebrew Bible…which the Pharisees followed; however, lacking a little clarity as to what this exactly looked like they had added so many traditions and rules onto the keeping of Sabbath that it didn’t reflect God’s intent. The issue that infuriated them was not the fact a paralyzed man was healed and that a miracle had clearly happened, one like no one had ever seen or heard of ever! The issue was that he had picked up his bed and carried it on the Sabbath…this broke their rule. God is Lord of the sabbath…they had to agree that God worked through the sabbath or the universe would completely fall apart…My Father is working on the Sabbath and I am to care for and redeem those affected by sin. Jesus would continue to heal people on the Sabbath further infuriating the Pharisees. Jesus had also referred to God not as “our Father” but “My Father”. They knew instantly what Jesus was saying…this was claiming equality with God…here Jesus moves from religious agitator to Blasphemer. The line in the sand has been drawn…and the question that has continued to be asked throughout the ages they have asked…What do we do with Jesus?
This reminded me of a break in that we had in our house…we noticed coming home one day that our screen and window had been messed with. So we checked to see if anything was missing…what we found missing was my son’s jar of money…My kids went out and played…and one of the kids in the neighbourhood was giving out tones of candy to his friends…but he was also showing them all this strange money, now I have travelled to a lot of countries and I would bring back their money and give it to my son…it was obvious that this little guy had broken into our house and stole the jar…the evidence was all there. However, he refused to acknowledge the evidence that was right in front of him…condemning him…this is exactly what was happening and would continue to happen…absolute denial in the face of overwhelming evidence.